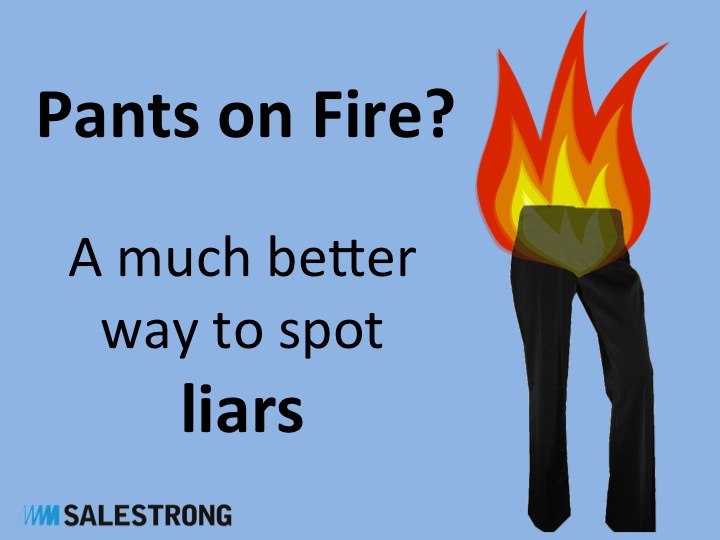 Liar, liar, pants on fire! A taunt so often hurled across corporate board rooms. We’ve all said it at some time in our lives. But have you ever seen it? I mean, the last time someone lied to you, did their pants spontaneously combust? Could you smell any burning at all? If you replied, “Yes”, please take a quick look downwards to see your theory go up in smoke.

In my negotiation skills courses people love the work we do on body language. The subject of lying comes up a lot.  To understand how to spot a liar, at a hundred paces, we first need to examine why we lie. If you look at other mammals, for example foxes, after they are born it’s not very long before the cubs are trying to kill other animals in order to eat them. There’s a very short time between birth and self-reliance. Look at humans, and after whole year and half our offspring might just be able to toddle gingerly along, but still very reliant upon the parents for a significant time to come. So What? Well the lesson here is that humans are reliant on each other from a very early age. That reliance requires social skills, and one such social skill is the ability to bend the truth. Think back to your early years. That’s going to be harder for some than others. Now think what happened when you told your parents that you didn’t like the food they’d prepared. Did that teach you to enjoy the food you didn’t like, or did it teach you to conceal your feelings? The positive effect now is that when your significant other asks, “Do I look OK in this outfit?” You reply, “Why yes of course darling,” regardless of whatever you are actually thinking. Blurt out the truth and the social fabric of your family yurt could be torn apart at the seams. So the ability to lie like a hairy egg can sometimes be morally justified and beneficial to the social group.

This is an important point when it comes to spotting liars. Their pants will not be on fire, and they like you and everyone else that’s not on the autistic spectrum, are all pretty darn good liars. After all, we’ve spent our whole lives perfecting the technique, keenly encouraged by those around us. So when you want to spot a liar, don’t look in the usual places that we normally use to communicate, like the face. The face is an expert lying tool. You need to look elsewhere on the body. But you need to look elsewhere without raising suspicions, and without the police being called, so let’s look at how to do that.

The Science of Lying

Using a robot named Nexi, Northeastern University psychology professor David DeSteno and collaborators from MIT and Cornell University, reached some stark conclusions about how to spot if someone you’ve just met is a liar. This and other finding are in his new book, The Truth About Trust. Assessing the trustworthiness of someone you’ve just met is, of course, a key skill for sales people and negotiators. The ability to do so is a competitive advantage.

In the absence of reliable information about a person’s reputation, we’ve known for years that nonverbal cues can betray a person’s intended actions. Think about poker player ‘tells’. However, actually pinpointing the cues for lying has proved surprisingly elusive. Using data from competitive conversations where money was at stake, the team found that it’s not just one single cue that determines if a person’s lying, but rather a set of cues. When participants demonstrated these cues together, they cheated their opponents more. Not unsurprisingly their opponents at an intuitive level could also tell that they were lying. DeSteno claimed that the reason these cues for lying had not been ascertained before, was because people were looking for one single cue, when in fact it is the combination of multiple cues that’s the key.

The combination of cues are: hand touching, face touching, crossing arms, and leaning away. Now I don’t know about you, but if I was in a meeting with someone who was leaning away with their arms crossed whilst touching their hands and face, I’d think there was a bigger problem than a little subterfuge going on. But what I think the team of scientists actually meant was that the cues combine within seconds of each other.

The team not only isolated the cues for lying, but also demonstrated that other people will pick up on these at the subconscious level. So what we can do now is bring what were previously subjective gut feelings into the world of objective reality. Next time your gut is telling you not to trust someone, watch out for the four cues. But don’t shout ‘Liar Liar Pants on Fire!’ Because the science has proven beyond doubt, that combusting pants are not one of the four cues that signify that a porky pie has slipped out.

Typically regarded as a skill you either have or you don’t, EVERYONE can improve their ability to communicate effectively and effortlessly.

Sales people who are good at listening know the difference between listening and active listening... http://bit.ly/ListenTips

Why do some sales people seem just to be better at sealing the deal than others? Well it’s not because they’re great at closing, as such, but because they’ve done all the hard work upfront.